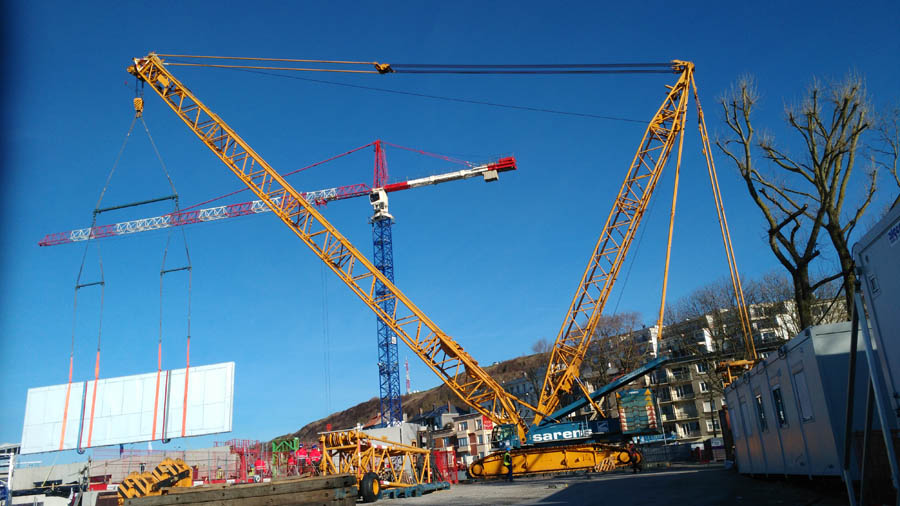 Sarens recently collaborated with Sogea Caroni, a subsidiary of Vinci Construction France, to assemble part of a dramatic new addition to the beautiful Nausicaà National Sea Centre in Boulogne-sur-Mer, France.

As one of the largest public aquariums in Europe, Nausicaà draws over 600.000 visitors each year. Its new architectural addition, the Grand Nausicaà, is a statement structure designed to look like an enormous manta ray enveloping the aquarium.

The vision of architecture firm Rougerie, this concept incorporates a giant basin that will hold 9.500 cubic metres of water, offering a "voyage on the high seas." A surrounding ampitheatre will allow for spectacular sights of the basin and become the destination for dynamic new attractions, including hammerhead sharks, manta rays, giant tortoises and walruses.

Sarens is proud to have helped bring this vision to life by installing the large bay of the basin. The operation required a CC2500-1 SSL crawler crane with 54m boom, 150 + 40 ballast, and 150t ballast SL. It was selected because of its 60t capacity at a 45m radius, and reached the job site in 10 days by road.

Sarens performed the lift underground to successfully install the bay in the basin. The lifting was done near the sea, and in a confined, 14m space for the superlift. The fragile nature of the bay was a special consideration, and Sarens operators treated the 60t load with the utmost care and attention.

"I would like to thank everyone for this unique project at Boulogne-sur-Mer," said Arnaud Mathias, KAM. "This is Sarens' contribution to a fragment of the French heritage, and we are very proud of that."