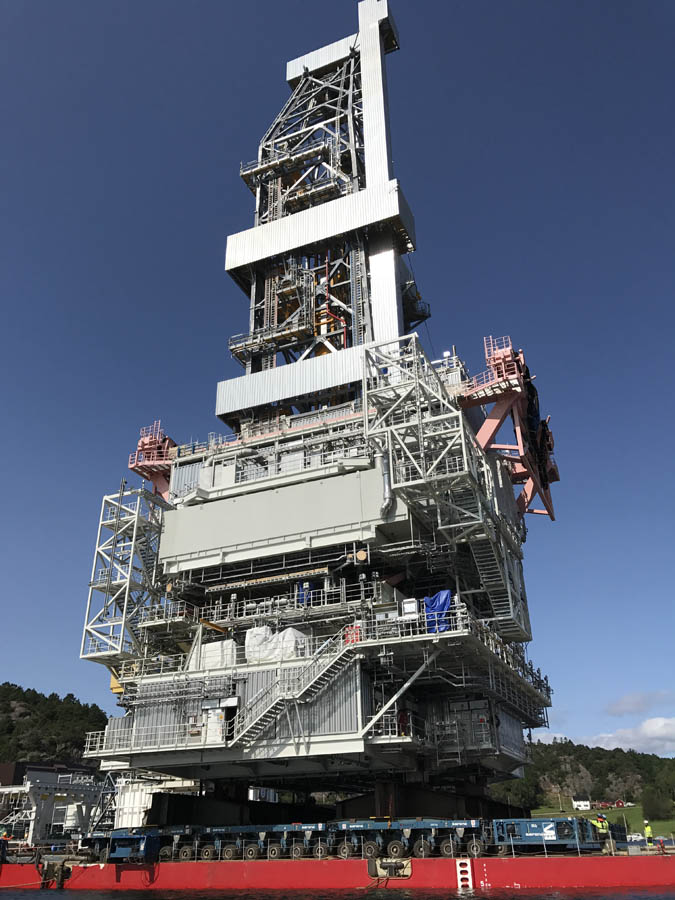 Sarens recently performed the load-out and weighing operation in Grimstad, Norway for the Johan Sverdrup drilling platform. Johan Sverdrup is one of the five largest oil fields on the Norwegian continental shelf. With expected resources between 1.9 - 3.0 billion barrels of oil equivalents, it will also be one of the most important industrial projects in Norway in the next 50 years.

As part of the operation Sarens was required to perform:

The project is ongoing for more than a year. In the early phases Sarens performed the load-in of the drill floor and the substructure. In February we performed the weighing of the two sections of the DES. The heavy lift vessel, Rambiz, executed the stacking of the two sections to form the DES and eventually Sarens successfully executed the weighing and load-out of the DES for the Johan Sverdrup drilling platform.

For the weighing operation we used 14 x 500t weighing cells with hydraulic jacks. For the load-out operation, 108 axle lines Kamag K24ST w/6 PPU's was deployed along with 16 ballast pumps and 8 PPU's. All the equipment was mobilized with ship from the HQ in Belgium and in trucks from different site locations of Sarens.

The DES weighed approximately 3300t having dimensions of  30mx30mx91m. The dimensions offered major challenge as the height of the module was not balanced by the dimensions of the  base, leading to a high center of gravity. The load-out had to be precisely performed so that the module doesn't topple on the base.

Moreover the capacity of the ballast tanks of BOA44 (the barge for transporting DES at sea) were insufficient for performing the load-out directly onto it. The team had to first load the DES out to a larger barge (BOA36) to make the final load-over to BOA44, independent of the tide. Upon completion of the first load-out, both the barges were ballasted down and the load-over was executed flawlessly. The fact that one load-out turned into 2 had impacted the engineering, mooring conditions, equipment, and duration of operation. The load-out to BOA36 and subsequent load-out to BOA44 lasted for 7 and 13 hours respectively. Our 14 member crew worked round the clock, in both the shifts to safely accomplish the challenging operation.

Project manager of AS NYMO, Petter Lindås was completely satisfied with Sarens performance and remarked, "We thank you for your contribution to a successful final phase in a challenging project!"