Sarens Home
»
About
»
News
»
Skillfully Orchestrating the Load-Out of Enormous and Complex Modules in Vietnam
Sarens performed the load-out of one of the heaviest modules of the region in May of 2016 for PTSC Supply Base.
12
July 2016 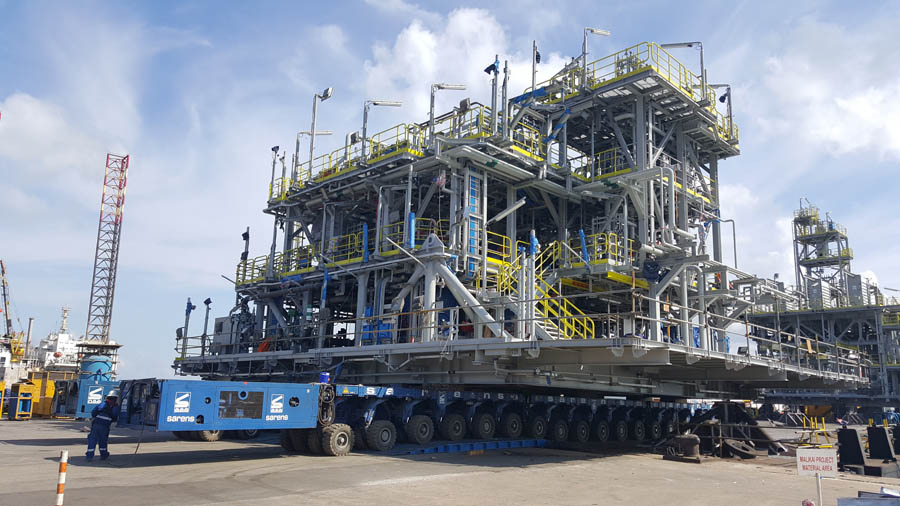 In 2015, PTSC M&C was awarded a contract by the Yinson Production Pte, Ltd for the provision of engineering, procurement, construction, and transportation of two topside modules, namely MM1 and MM2 of the Ghana FPSO Project that invested by Ghana National Petroleum Corporation (GNPC)which weighed approximately 3,500 tons. In continuation to that, PTSC M&C also received the second LOA issued by Kanfa in which its scope includes engineering, procurement, construction, and transportation of four Ghana FPSO modules namely MG1, MP1, MU1 and the MI1 with total weight of 2,000 tons. Over years of development, PTSC has become one of the leading technical service providers in Vietnam successfully conducting various complex onshore/offshore projects for local and international clients.

In the past, Sarens has successfully executed a number of jobs for PTSC with utmost precision and within the stipulated time frames. Moreover, Sarens has a proven record of working with SPMTs worldwide. Sarens was also part of the working group that compiled the recently released best practice guide on SPMTs. Since, moving Super ODC modules using SPMTs involves a considerable amount of expertise as well as risk, PTSC outsourced the job of load out of the modules for Ghana National Petroleum Corporation to Sarens. This was the first time that Sarens was awarded the project of load-out by SPMT with PTSC Supply Base directly.

Performing the load-out of six custom-built, particularly complex modules, in two shipments where the heaviest module weighed 1900 MT, was a challenging work and demanded a carefully choreographed engineering plan. To perform the load-out the team arrayed 96 Axles + 4 PPU of Kamag SPMT, winches and ballast pumps. Sarens accomplished the full scope of this project including mooring, ballasting and transportation engineering.

In words of Steven Coulson, Regional Operations Manager, Asia, who spearheaded the operation, "Safety was priority with Tool Boxes and Risk assessments being held prior to any operation. The Client was very happy with performance with no delays in operation in tight load out schedule."

By successfully completing the challenging load-out, Sarens has further strengthened its position as a world leader in the Oil and Gas sector not only in Vietnam but worldwide.