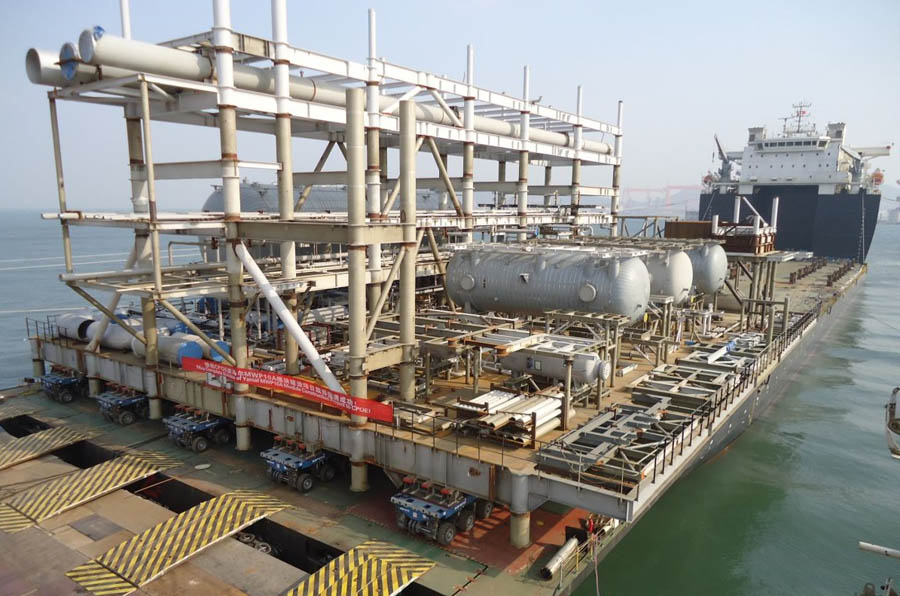 Penglai Jutal Offshore Engineering Heavy Industries (PJOE) is a globally operating upstream fabricator which specializes in the fabrication of large and complex structures for the upstream industry for oil and gas, mining, desalination, energy and related activities. PJOE won part of the construction and mobilization contract for Yamal LNG project, based in Yamal peninsula in Northern Russia. Awarded in 2014, the Yamal LNG project will comprise three liquefaction trains of 5.5 million tons per year that are among the world's largest.

Sarens-Sinotrans JV (SSJV) was awarded the contract for the Load-out of modules for the Yamal LNG project for PJOE. As a part of this project a number of modules will be transported by vessel to Sabetta in the North of Russia and Sarens will provide the transport from the fabrication area to the quayside and the load out work for the modules. A series of load-outs were performed in 2015 and most recently the SSJV carried the load-out in March 2016 at Penglai, China.

The job involved the load-out of a super ODC (Over Dimensional Consignment) weighing 1604 t with a complex dimension of 25x38x31(m). SSJV successfully completed the task using Sarens SPMTs in 8x 22 axle lines configuration. The seamless execution of the project was a result of the engineering expertise of Sarens along with the expert sales and project administration of Sinotrans, together rendering the joint- venture its strategic position to serve the Chinese clients.

The project was a classic example of successful blend of cultures and skills, surpassing all geographical and cultural barriers. In words ofBen Duym, Sr. Project Manager, SSJV, "A special mention goes to the efforts involved in training the local Chinese engineering workforce to execute such specialized engineering operations, supervised by Sarens HQ Engineering Department."

The Sarens-Sinotrans Joint-venture was formed with an objective to tap the highly potential Chinese market and serve the Chinese clients worldwide. The two companies bring their best of talent, practices and experiences on table to successfully realize this objective.Dirk Verwimp, Dirk Verwimp, Deputy General Manager of SSJV, who has been spearheading the SSJV adds, "We regularly organize trainings for our people in China to hone their skills. Trainings are given on a wide range of subjects including general management, fleet & maintenance, engineering, sales, ISO & QEHS etc."

Go ahead and watch the time lapse video of the operation through this link: