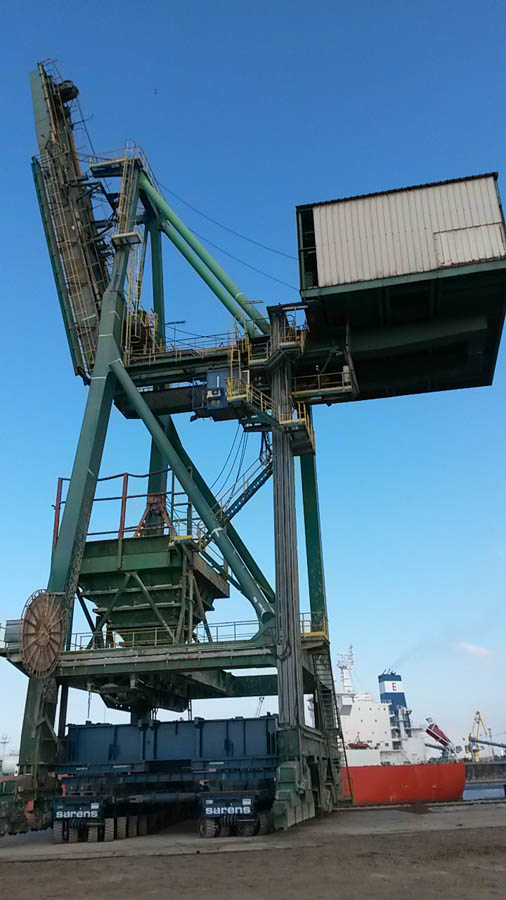 Jorf Lasfar is a major commercial port in Morocco. The deep-water port, known as "yellow cliffs" in Arabic, handled 22.7m tonnes of cargo in 2015, accounting for 27.9% of the country's port traffic. In terms of volume, Jorf Lasfar is second only to Casablanca.

The port's harbor is equipped to export a variety of minerals and chemicals, including phosphate rock, sulfur, ammonia, and sulfuric acid. As demand for these commodities has grown, so has the need for cargo-handling equipment, including high-end ship unloaders.

To ensure it meets the growing demand for reliable equipment, Jorf Lasfar is working with FLSmidth Wadgassen GmbH, a leading supplier of equipment for the mineral industries, to replace its aging ship unloaders.

FLSmidth Wadgassen teamed up with Sarens to begin the replacement work. The first task was to move two of the port's old grab ship unloaders, P401 and P402, from one pier to the next.

The two ship unloaders each weighed 561T and had to be moved a total distance of 500 meters. Sarens swiftly maneuvered them to the new location using 11 axle-line SPMTs along with a power pack. A specially designed steel transport configuration was installed on the SPMTs to allow safe and precise lifting and subsequent transport to their final destination.

Sarens would like to commend the four-member crew for their safe and timely work on this operation. Their expertise and careful attention to detail have resulted in another satisfied client!