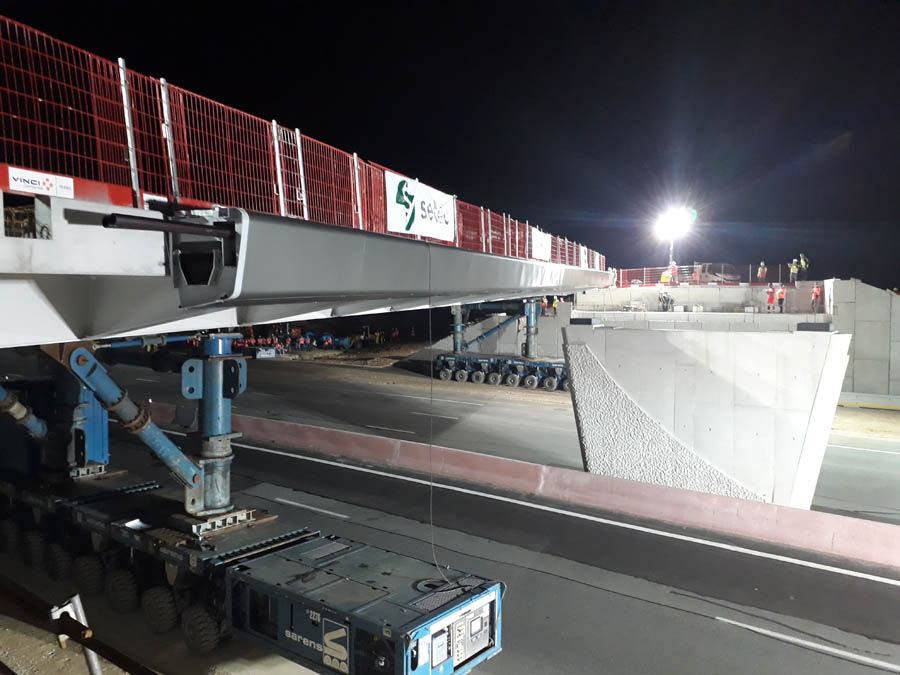 Sarens was commissioned to maneuver and install two bridge sections - PS10 and PS20 of the A36 in France. The construction of the A36 / N1019 interchange is part of the extensive 2 x 2 lane operation of the national road between the A31 (Langres) and the Swiss border (A16). This project will prove beneficial for travel between Belfort and Montbéliard, also making it safer.

The two bridges were to be installed consecutively. The first bridge had to be installed over the highway during a weekend-night. The second bridge had to be installed over a regional road, during a weeknight, little over a week later. An additional challenge concerning the planning was the fact that all equipment had to be disassembled, transported to the other construction site a few kilometers further, and reassembled in between the installation of the first and second bridge.
Sarens crew of five members deployed 16 axle lines K24 ST for the maneuvering and four jacking towers CS250 to jack the bridge sections and install them by placing the deck on the elastomeric supports on the concrete pillars of the future bridge. Bracing system BS610 with turntable connections were also deployed to compensate for the fact that one of the bridges was shaped like a parallelogram.

Project Manager, Tom Jonckers says, "Preparation area for jacking and assembly of equipment was very small, but our proven experience and skills of our team made the operation successful in record time. The client was very happy with the installation."