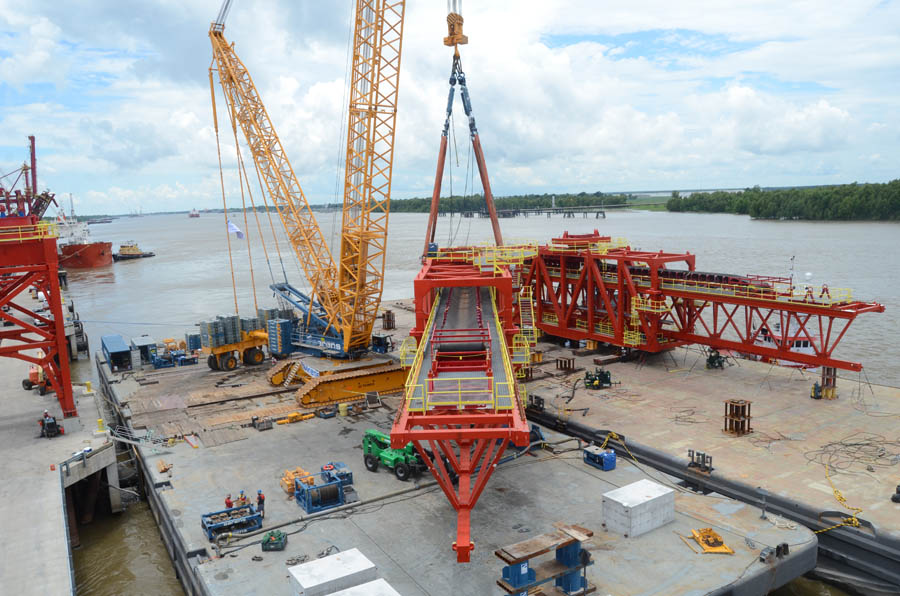 The SunCoke Energy Partners' Convent Marine Terminal (CMT) in Convent, La., is one of the largest export terminals in the U.S Golf Coast, providing strategic access to seaborne markets for coal and other industrial materials. Since acquiring the facility in 2015, SunCoke has invested $20 million to modernize and expand operations with the addition of the largest shiploader ever constructed.

SunCoke enlisted the experts at Sarens to plan and perform the challenging job of erecting the massive shiploader at CMT. Located on a jetty that is inaccessible to heavy machinery by land, the Sarens engineering team developed a lift plan that included the use of a 300-ft x100-ft barge to float the largest and heaviest crawler crane ever used on a barge for this type of operation in North America. To successfully accomplish this, the engineers needed to account for the weight of the crane and the redistribution of the material's weight by extensive ballasting throughout the rigging and lifting process as the shiploader pieces were placed on the platform.

The shiploader arrived at the CMT site by barge in 10 pieces; the heaviest of the pieces weighed 450T. To perform the challenging lifts, the Sarens team selected a Terex® CC 6800 crawler crane from its fleet along with a superlift wagon and ballast system. The crane was outfitted with the Sarens SARspin rigging system to help level the load through the use of four hydraulic cylinders.

Sarens' Terex CC 6800 crawler crane was transported from overseas directly to the barge in the port of Chalmette, LA., where a team was waiting to assemble the crane on the barge - a process that took a total of eight days. Using a SSL configuration with a 72-m long main boom, the crane was outfitted with a 500T hook block with 2 x 10 lines and two runner lines, a superlift wagon with 450T of weight. Additionally, to ensure proper load distribution of the weight of the crane and the material being lifted on the barge, load spreading mats where used. In order to reduce the ground bearing even more, a special setup reducing the crane's counterweight to 170T and the central ballast left off completely to help better distribute the weight on the barge.

After assembling the crane, the barge with all of Sarens' equipment was then transferred to the CMT site. The shiploader structure also arrived via two barges from a port in Tampa, Fla.

Onsite, the 300-ft x100-ft barge with the crane was positioned next to the shiploader platform and tied off to the jetty using mooring winches that would allow crews to reposition the barge during the erection process. The barges with materials were then positioned on the other side of crane's barge. The water current/velocity on the Mississippi is very high with high fluctuations and fairly unpredictable changes. Furthermore, the site is located in a turn in the river, creating a push of the barge away from the jetty. A proper mooring arrangement, using hydraulically driven winches was used to stabilize and position the barge for each lift.

"To execute a project of this magnitude and complexity was challenging, says Steven Sarens, Director of Houston Operations at Sarens. "Anytime, we're performing a lift from a barge, it's important for everyone to be 100% focused and concentrated. An adequate preparation and consequently following the step by step procedures are key when performing these complex operations. The process involves more than just lifting and swinging material into place, operating a large crane on a barge is a slow and delicate process that requires adequate coordination."

A total of 26 lifts were made over the course of 23 days, including three towers and three booms sections. To begin each lift, the crane was walked over to the material facing side of the barge, and the initial pick was executed. As the crane lifted each piece, water had to be pumped in on the other side of the barge to balance the additional weight. From there, the crane would begin swinging the material around. The crew would have to stop frequently to add more water until a full 90° was achieved. Once the material was aligned with the crane's barge, the operator slowly walked the crane over to the shiploader side. Again, water needed to be pumped to the other side to balance the shifting weight of the crane and the material. Finally, when the crane was in position, the full 180° swing was completed. The process usually took between 2-3 hours, depending on the size and weight of each piece being lifted.

The crane's ballast wagon helped to keep the crane and material balanced on the barge, as well. The wagon was strategically positioned throughout the lifting process to keep weight evenly distributed on both tracks.

The crane's rigging included a Sarens SARspin system, a four hydraulic cylinder rig that helps to level material as it's being placed in its final resting position. "The SARspin saves a lot of time on jobs - especially one like this," explains Steven. "During the assembly process, a correct positioning of each load, whether it being perfectly level or under a certain angle, facilitates the process. This type of rigging equipment lets the crane operator make fine adjustments through a wireless remote control at any time during the lift."

The flexible setup also helped the Sarens team better adapt to changing weather patterns and water velocities. "From the equipment we used to the way we set everything up, we knew we needed to have the ability to make adjustments during each lift," says Steven Sarens. "We developed an excellent plan and did a good job of making onsite adjustments. It worked perfectly."

There was a total of 12 Sarens personnel working on the CMT shiploader project. And when the crane wasn't swinging, the team was hard at work assembling the pieces of the shiploader and constructing a conveyor system.

Sarens team has been working on several projects at SunCoke's CMT location over the past several years. They have installed stacker reclaimers and are in the process of replacing the existing conveyor system for another shiploader - a project that also calls for the use of a crane on a barge.

Erecting the world's largest shiploader using the largest and heavy crawler crane ever installed on a barge in North America is no easy task. It took the expertise of Sarens' worldwide team to make a monumental job like this one, go smoothly.