Sarens Home
»
About
»
News
»
Sarens Begins Installing The Roof Of The Biggest Arena Of Europe
Sarens installs the first beam segments of the Roof of Arena 92 which is scheduled to open in 2017.
3
September 2016 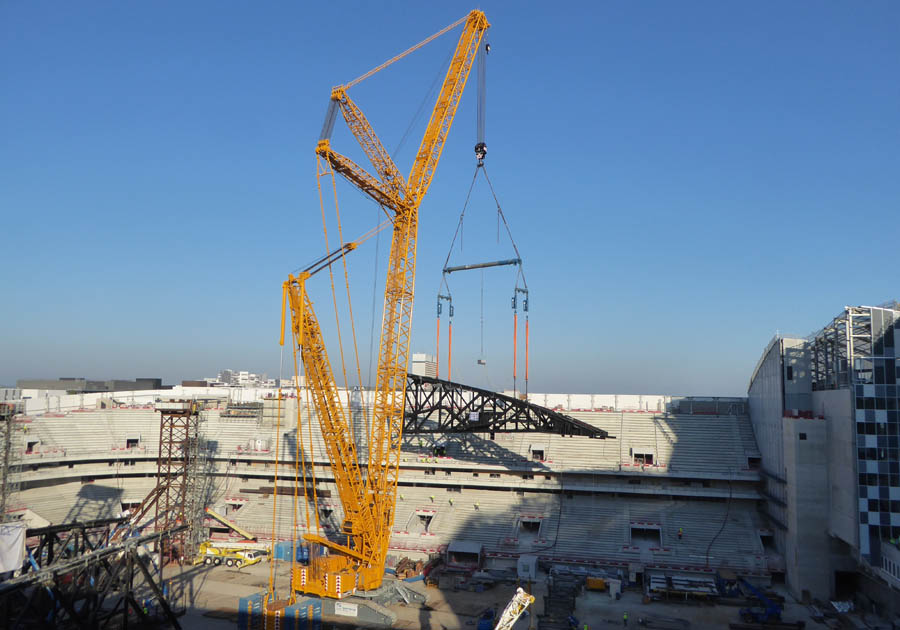 Scheduled to open in 2017, the "Arena Nanterre-La Défense" is an "indoor" stadium and the ground of the "Racing-Metro 92" rugby team, in the Hauts-de-Seine region. It will be the biggest, most modern and most modular arena in Europe. L'Arena is both an auditorium and a rugby stadium. Every year the venue will host about fifty events - including concerts, conventions, sports matches and live performances - attended by between 10,000 and 40,000 spectators. L'Arena will be a unique object in a magnificent area, in the heart of French Manhattan and right on the famous Parisian Axe Historique which runs from the Louvre to La Défense via Place de la Concorde and the Champs-Elysées.

Sarens was awarded the 1.3 million Euros contract for the installation of the roof of Arena 92, scheduled to complete by November 2016, the work on which began mid-August. The roof was initially designed to be a retractable roof but will now remain closed permanently for acoustic reasons and to avoid inconvenience to the local community during event days.

The roof installation forms the most trickiest task of the site in terms of outsized steelwork. In order to achieve this technical feat the client required one of the most powerful and reliable cranes in the world. Sarens was roped in to execute the task with its LR 11350 crane. The project team deployed the crane LR11350 in SDBW configuration with ballast 200 to 54m / 48 m and Superlift upto 560 tons. It took two weeks for the compete setting up of the crane. Since the Arena lies in the heart of Paris, it was a challenge to get all the equipment and the huge crane to the site location through narrow passages and spaces allowing limited movement. Moreover the limited space available inside the Arena made it a further challenging task to assemble the crane. But the Sarens team swiftly assembled the crane to start the operation by Mid-August.

As part of the first lift, Sarens installed the 318t Mega structure-1 which forms a part of the 120m long beam which contains 4 sections together weighing 640t. This large beam segment was manufactured partly at Arcelor Mittal and assembled on site in view of its size. To perform the lift Sarens operations team worked with the crawler crane  LR11350  along with Sarspin (4x200ton)

The steel structure had to be moved through a total distance of set down equaling 40.5m. The MS1 was picked up at 28m distance and slewed by 175 degrees moving a further 20m and was eventually boomed down to its final position.

As part of this eminent project, Sarens has till date completed installing the four segments of the 120m long beam. Catch on the live updates from the project by accessing this link: http://www.arena92.com/the-building-site/live-link-to-the-site