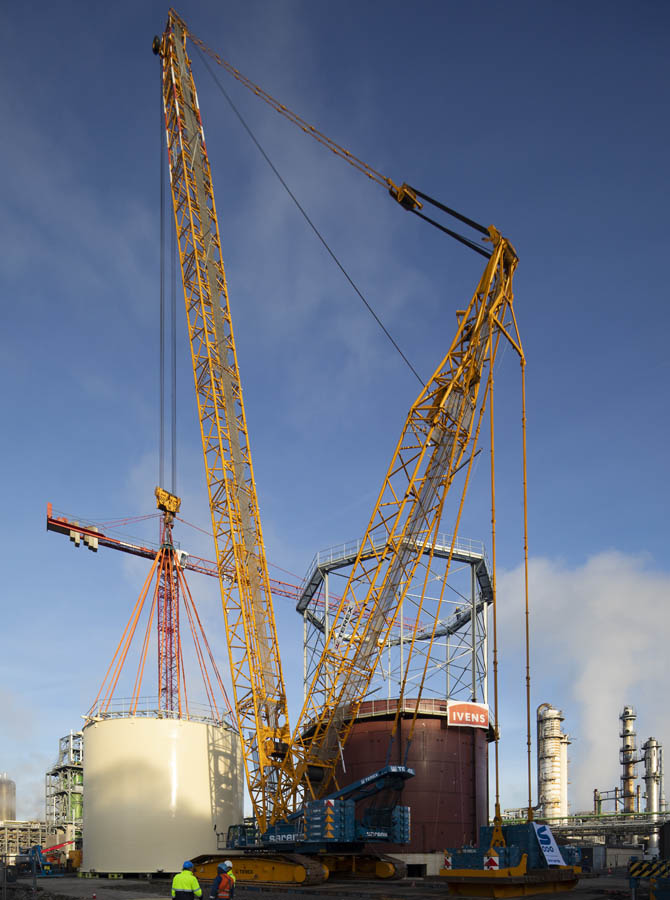 Inovyn, one of the largest producers of PVC in Europe, planned to increase production at its Belgian site Jemeppe-sur-Sambre in September 2018. The expansion will result in an additional production of 200,000 tons of PVC of convenience annually on the site. The plant is already functioning and produces around 480,000 tonnes of PVC per year.

An already operational plant meant confined space, precise planning, and utmost safety measures. Moreover, working on a live chemical plant was critical and a lot of safety requirements and procedures were set to get access to the site.

Keeping all the challenges in mind, Ivens commissioned Sarens, the reference in heavy lifting, to perform the lifting of a gasholder at the site.

Sarens had to lift a gas holder weighing 158T and measuring 14m in height. The gas holder had to be placed in its housing so that it could travel up and down as the volume of gas changes in the gas holder. The role of a gas holder in the plant is to provide constant pressure on the gas it contains. The space was very confined and along the project the client decided to double the mandatory lifting height.

After thorough planning our team decided to deploy CC2800 K4552 SSL/LSL 84m and engineer the project with a longer boom to address the requirement of the client. The gas holder had to be lifted with 12 soft slings. A lifting ring was also transported from our Netherlands division used between the hook and the soft slings.

Our three member crew including a lifting supervisor, auxiliary crane driver, and main crane driver lifted the gas holder at a radius of 14m.  The bearings and running boards between gas holder and housing were adjusted to have smooth upward motion of the gas holder in the housing. The lift was performed safely and completed within 24 hours.