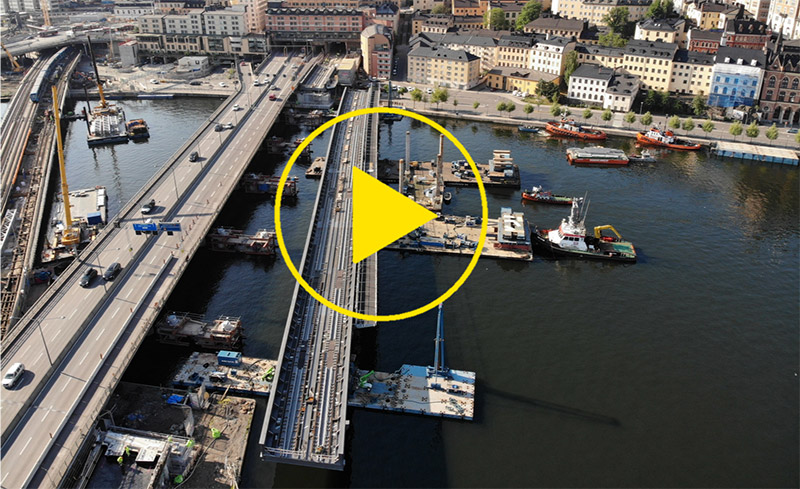 Implenia Sweden AB recently contracted Sarens to replace an old railway bridge in the busy city centre of Stockholm, an operation that involved loading out three new bridge sections in Tallinn, Estonia; transporting them on Sarens’ largest seagoing barge and several inland vessels; and installing them in Stockholm using the ‘floatover’ method.

The operation was completed in several phases:

For this project, Sarens deployed several seagoing and inland vessels, as well as auxiliary equipment, including:

Planning was critical to the success of this operation because Sarens had to coordinate all activities with the timing of the railway closure. Work commenced on May 15, 2019 and was completed by July 30, 2019. Some changes to the execution method had to be made at a later stage, shortening the lead time Sarens had to complete activities in a timely way.

According to site manager Michal Jevcinec, “All operations were extremely challenging due to a tight time schedule, tight operational space in the heart of Stockholm, and the highest quality and precision requirements. An excellent working relationship, engineering, project team dedication, and punctual realisation made it possible to reach the project milestone ahead of schedule.”

“It was a challenging job in terms of organising and coordinating activities at three different locations in Sweden, ending in the beautiful city centre of Stockholm where we could demonstrate Sarens capacities and qualities in bridge installation solutions,” says project manager Jaap Ottevanger. “Thanks to the highly dedicated Sarens team, our marine subcontractors, the local authorities, and last but not least, our client Implenia.”

This project was a success thanks to the talents of project manager Jaap Ottevanger, site manager Willem Ditmer, site supervisors Tom de Bondt and Ben van Aggelpoel, project engineer Stef Walraet, and as many as 20 crew members working at the project’s peak. Congratulations to everyone involved in this operation!