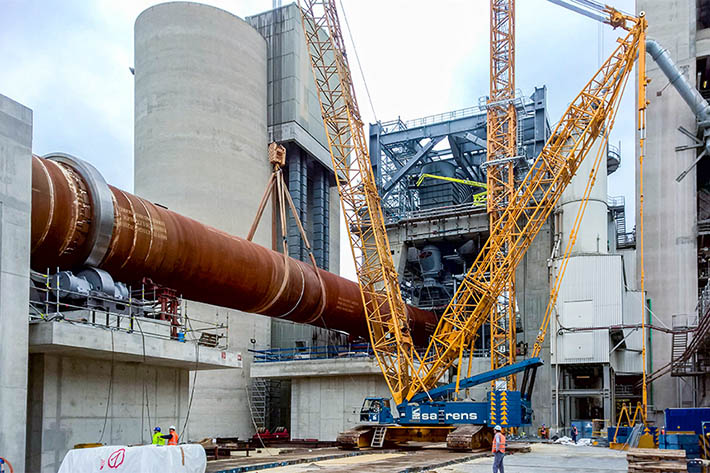 As an energy-intensive company, HeidelbergCement AG has made substantial efforts to minimise their CO2 emissions and as part of the initiative they replaced their existing cement rotary kilns with technologically advanced and less carbon emitting rotary kiln.

Sarens team was entrusted with the responsibility of hoisting the five components of the 68m long rotary kiln up to a height of 11m in a restrictive space. The challenge was to figure out a solution which could be assembled in a small space, lift a weight of 144t and is compact enough to operate in that given space.

The engineering and operation team decided to deploy the 350t LR1350-1 with a 42-metre main boom, a 27-metre derrick boom, as well as 85t of superstructure ballast and 75t of suspended ballast. It took 20 trucks to transport the lattice boom crane which was assembled in 3 days by the use of an auxiliary 70t telecrane. The biggest difficulty was the very limited space; 3 tower cranes working in the vicinity as well as a working rotary kiln next to the crane. Project Manager, Bram Van Overwalle says, "Due to the restricted space, we had to engineer every single movement of the crane beforehand. During execution, the crane operator needed to follow all instructions very precisely because we needed all the space we had."

Once assembled, the Sarens team performed the lift of seven pipe sections of a rotary kiln which were assembled by our client 'Duro Dakovic Montaza d.o.o.' &  Thyssen-Krupp. The 7 pieces together formed a cement rotary kiln with a diameter of approximately 5 meter. The biggest load we had to lift was a kiln segment of 144t for which the team used an additional 75t of suspended ballast above the normal crane ballast. The challenge during this lift was the very limited rotation space with the suspended ballast so the team precisely combined slewing and crawling to get into the right position and safely execute the lift.

Regional Sales Manager Germany, Maarten Joost de Korte remarks, "Attributable to our good preparation and engineering work before, our customer was very pleased with our performance. All lifts went as scheduled."