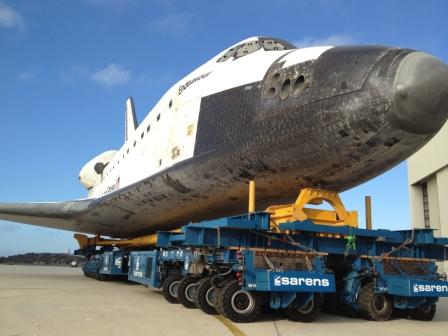 Accustomed to reaching speeds of up to 28 000 kph in space, the space shuttle Endeavour was reduced to a crawling 3 kph as it made its way through Los Angeles en route for Inglewood City Hall for an official launch ceremony before reaching its final destination at the California Science Center.

The Endeavour's "final mission" was the result of months of meticulous planning by Sarens engineers in collaboration with multitude of public and private entities. An array of specially designed, Self-Propelled Modular Trailers (SPMTs) were used to transport the Endeavour. Comprising four independent, multi-axle, computer-controlled wheeled vehicles, the SPMTs will ensure precision manoeuvrability and stability while moving the shuttle along its densely populated route.

The SPMTs are controlled and steered as a single vehicle by a person walking alongside the shuttle using a remote joystick control panel. Additional spotters will be positioned near the nose, tail and wingtips to enable precision manoeuvrability near potential obstructions such as buildings, poles and trees. This was the first and most likely the only time that a space shuttle was or will be transported through an urban environment.

Jim Hennessy, Marketing Manager, Sarens North America: "This may not be the largest or heaviest object we have transported before but it is certainly one of the most important in our company's history. The Endeavour is a national treasure and we are honoured to play a key role in its final mission en route to the California Science Center where it will be put on display for all to see."

The shuttle weighs 68 tonnes, has a wingspan of 24m tip to tip, is 38m long and measures 17m from the ground to the tip of the tail. In preparation for its transport, several high-voltage transmission lines were either removed or repositioned along with hundreds of streetlights, signs, traffic signals and identified obstacles.