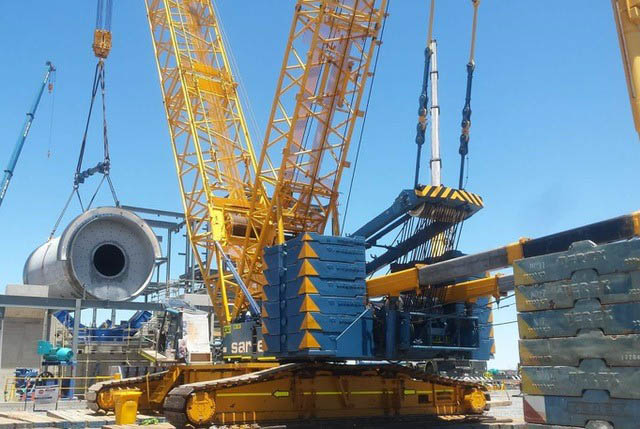 The Dugald River mine, located a short drive from Cloncurry, Queensland, boasts one of the world's largest zinc deposits and is a key project for the Queensland economy. Because of its importance to the region, development has been fast-tracked and the mine is slated to be fully operational by 2018.

MMG Limited, which mines, explores, and develops base metal projects around the world, has been leading the A$1.4 billion development project since 2016.

MMG had awarded RCR Tomlinson Ltd, an Australian engineering and infrastructure company, a contract to build a processing plant at the mine. RCR Tomlinson, in turn, tapped Sarens to do the heavy lifting and installation work at the mining site.

For this project, RCR Tomlinson needed efficiency and adherence to a strict timeframe, and they trusted Sarens with both.

Sarens' first task was to perform the lifting and placement of the semi-autogenous grinding (SAG) mill component. For this, the engineering and operation teams selected the Liebherr LR 1400/2 crawler crane, along with a number of supporting cranes, including three all-terrain cranes, one rough terrain crane, and two pick and slew cranes.

The LR 1400/2 boasts a multi-functional boom system, requires shorter downtime, and can maneuver well within confined areas. It delivers enormous load capacities, thanks to its variable derrick system with hydraulic control, but it's also fairly compact, so it can be transported anywhere in the world at reasonable cost.

A Successful Load and Lift Operation

The Sarens team swiftly transported the crane from Western Australia by road and set it up in an SDB configuration at the mine site. Next, they lifted and placed the 91T, 29.92-meter radius SAG mill component.

This was a delicate operation: operators needed to carefully flip the SAG mill component into position before placing it at the designated location, which required careful and controlled operational expertise. To turn it from a horizontal to vertical position, they first used a 160T all-terrain crane. Next, they employed the LR 1400/2 to pick up the load and lift it to its final location.

A Lift for the Local Economy

Sarens will be performing more complex lifts at the Dugald River Mine in the coming months. We are pleased to know that our heavy lifting at the mine will also lift up the economies of Cloncurry and Queensland, which expect a major boost to employment, along with other economic paybacks, well into the next 30 years.