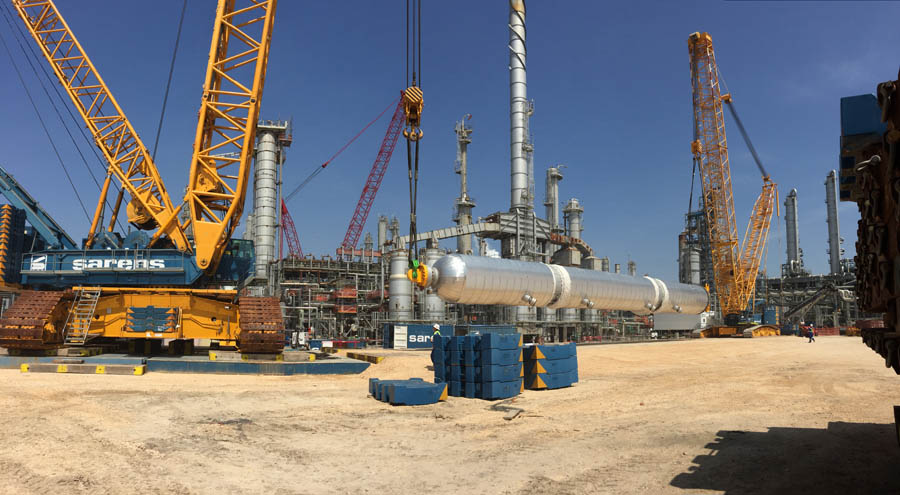 With today's extremely mobile societies, commodities like oil and gas continue to serve as the heart of the economic engine. They are the foundation required to transport citizens and goods from place to place, city to city and country to country, as well as illuminate and heat the houses and buildings in which we live and work.

Current environmental regulations demand that heavy gas oils be efficiently refined into high-quality, clean-burning fuels that produce fewer greenhouse gas emissions. To accomplish this, oil and gas suppliers must continually upgrade their refineries by installing equipment with the latest technology, designed to produce the fuels in the most clean and efficient ways possible, in order to meet the market demands of mobile societies.

Oftentimes, this refining equipment consists of massive components like hydrocrackers and depentanizers, weighing hundreds of tons, that must be safely and quickly installed so as to minimally disrupt the production process. Sarens, a global leader in crane rental services with U.S. headquarters in Houston, Texas, recently formed a collaborative working relationship with Kellogg, Brown & Root (KBR) of Dallas, Texas, to support the construction and expansion activities at an oil refinery in Corpus Christi, Texas. Sarens USA provided its expertise to manage all facets of the heavy lifting requirements of the project.

"The Corpus Christi project has two parts," explains Sven Janssens, operations manager for Sarens USA. "The first part requires the lifting and installation of two massive reactors plus a staircase module and platforms performed while refinery production was taken offline. The second part is lifting and installing 58 modules and two main equipment pieces during the life of the contract." The 10-month construction contract began in February 2016 and will conclude in November 2016.

To successfuly complete the lifts on time and within budget, Sarens initially mobilized three cranes from its fleet. A Terex® RT90 rough terrain crane arrived on site early to assist with crane set-up and perform general lifting duties throughout the duration of the contract. With its narrow, 9.8-ft(3,000-mm) width, this 95-ton(86-tonne) capacity crane is quickly transported to the jobsite, while its long 154.2-ft(47-m) main telescoping boom length gives Sarens the flexible combination of capacity and system length required to complete a variety of general lifting duties throughout the duration of the project.

A 385-ton(350-tonne) capacity Liebherr LR1350S crawler crane arrived at the Port of Galvaston from Australia in March and was transported to the Corpus Christi jobsite. "The LR1350S was brought in to support the critical lifts of the hydrocracker vessels and depentanizer," explains Sergio Rueda, project engineer for Sarens USA.

Delivering the muscle for the bulk of the heavy lifting project, Sarens mobilized one of its 1,760-ton(1600-tonne) class Terex® CC8800-1 lattice boom crawler crane models. For the meticulously planned lifts, the Terex crane had to be equipped in its superlift configuration and with enough boom and counterweight to position an object weighing more than 640 tons(583 tonnes) at a set radius of  111.5 ft(34 m).

"Crane equipment transport to the project site took much planning to ensure all the necessary components were on site when needed," mentions Mark Curtis, transport manager for Sarens USA. "We mobilized more than 90 truckloads of equipment for the various required lifiting configurations, and we made sure we had them at the site on time, so the lifting projects could be completed within the scheduled time."

Once the crane components reached the oil refinery, Sarens' eight-person rigging crew began configuring the crawler cranes. The CC8800-1 crane was equipped in its heavy superlift configuration with 640 tons(580.6 tonnes) of ballast weight on the superlift tray. The crews installed 315 ft(96 m) of main boom to accommodate the largest piece being lifted. "Within about 10 days, we had both the Terex CC8800-1 and Liebherr LS1350S crawler cranes rigged and ready for the heavy lifting," says Traveis Tedder.

"The primary challenge at the refinery project in Corpus Christi," comments Sean Poynter, project estimator for Sarens USA, "is the site will remain active for a large part of of our heavy lift and rigging operations. The crane also had to be set back from the installation site to clear major plant equipment." For a refinery processing hundreds of thousands of barrels of crude every day, plant downtime registers in the millions of dollars per day in lost revenue, so Sarens and KBR planned the component lifts and installation to keep production losses at a minimum. .

There was one point during the lift contract, however, where the plant was scheduled for a five-day turnaround, where equipment maintenance and upgrades were performed at the refinery. This gave Sarens the opportunity to complete some of the heavy lifts and take advantage of a time when activity at the rest of the site was at a minimum. "During the turnaround, we worked on component installation efforts non-stop for five days and four nights," says Sergio Rueda, project engineer for Sarens USA.

"The lift went very smoothly, thanks to our experienced crane operators, riggers and equipment all working together," reports Traveis Tedder. "This was just a warm-up for the larger, heavier depentanizer installation."

The enormous depentanizer measured 262.5-ft(80-m) tall and weighed 642.6 tons(583 tonnes). Sarens and KBR crews carefully preplanned the lift over many weeks to ensure it would be performed as required. Once again, both the Terex and Leibherr cranes would be called on to peform a tandem lift to place the plant component.

"The depentanizer will be horizontally lifted by both cranes, while the LR1350S rotated about 120 degrees and kept radius," explains Sergio Rueda, project engineer for Sarens. "The CC8800-1 followed the smaller crane's rotation and boomed up to bring the top of the depentanizer closer to the crane. Then the CC8800-1 hoisted up, while the LR1350S followed by crawling sideways with free slew."

"Everything went incredibly smooth and all the preplanning paid off," adds Sven Janssens. "At the peak of the turnaround period, we had 15 Sarens team members working together to make sure everything went as planned."

While the bulk of the heavy lifting is behind them, Sarens' crew remains on site to finish the rest of the 58 module lifts. With the professionalism, planning and execution of the heavy lifts completed by Sarens during the turnaround, everything remains on schedule to complete the final lifts by the November 2016 contract end-date.