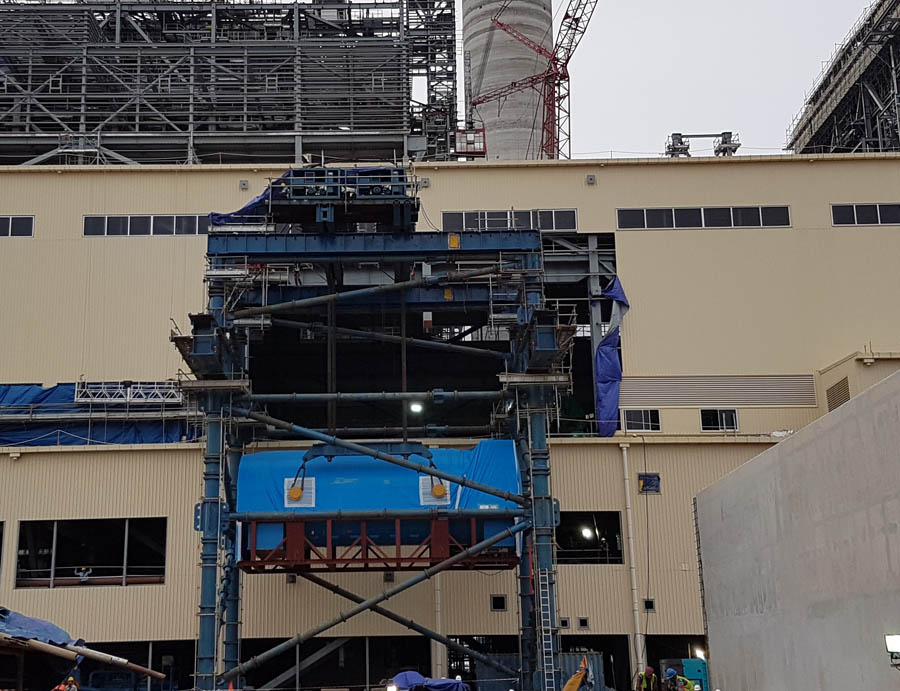 PLTU Batang or Central Java Power Plant (CJPP) is a critical coal-red power plant with 2 x 1,000 MW capacity in Batang Regency, Central Java. PLTU Batang is being constructed by the Special Purpose Vehicle (SPV) of PT Bhimasena Power Indonesia consisting of J-POWER (34%), Adaro (34%), and Itochu (32%). Once operational in 2020, the power plant will supply 35,000 MW of electricity for the population of Java Island. As one of  the first and largest PPP  pilot projects in Indonesia, the Central Java PLTU has a strategic role to encourage the involvement of private investment in infrastructure development.

There was a difference in the direction of the entrance and the installation position and a limited height available for deploying a turn-table. Our crew decided to lift the 3 cargo units (a generator, a HP turbine, an IP turbine) continuously with 2 gantries. The cargo had to be lifted 15m above the ground to generator foundation, skidded 30m inside, and then 40m backward.

Our team deployed 2 sets of gantry system - 4x185T strand jacks and 4x418T strand jacks with six configurations. Most of the equipment was transported from Malaysia to Semarang and the modular beam 1500x1000 was shipped from Belgium. The erection of the gantries was completed in 13 days, working in two shifts, to adhere to the schedule. Moreover, there was limited clearance between structures and the site of equipment erection.

Project Engineer, Ahmad Kamil says, "Our team along with the support of the client successfully completed all the three installations within the stipulated period of time. We even had to do some in-situ planning due to changes in the site condition. The equipment was safely erected in half the time, proving that with planning and commitment, almost anything is possible!"