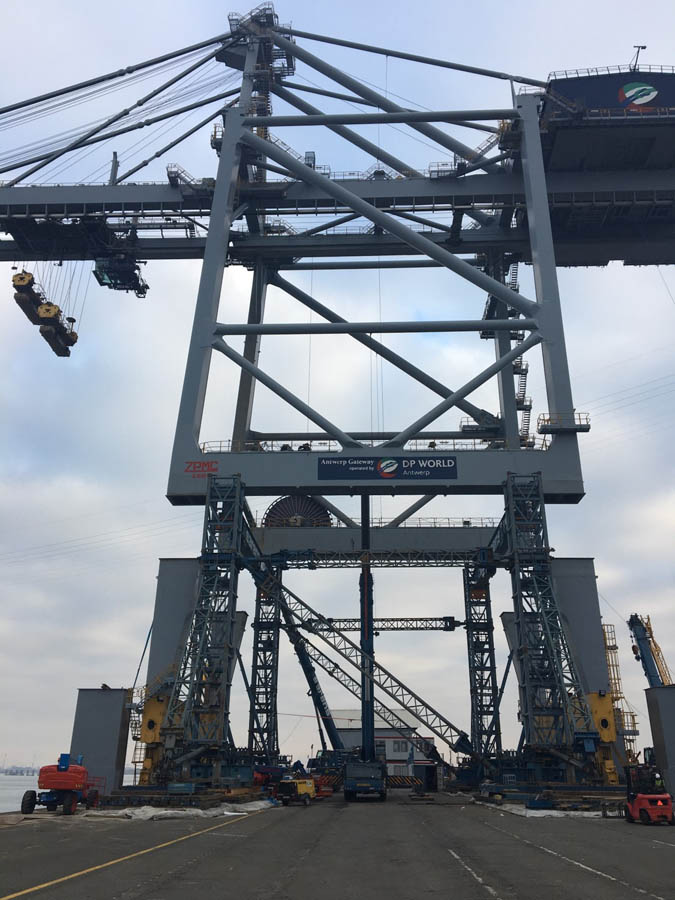 The DP World Terminal at the Port of Antwerp is preparing to welcome larger vessels, thanks to the upcoming inauguration of a new lock. To accommodate the loading and unloading of these larger container ships, DP World Terminal needed to raise the height of its current ship-to-shore (STS) cranes by 7m.

When Kalmar, part of Cargotec, won the contract to extend three of the terminal's STS cranes, they collaborated with Sarens to execute the operation. Sarens handled the transport and jack-up of the crane extension pieces, which involved lifting 1760T from 16m to a final height of 24m.

The five-person Sarens crew had to carefully coordinate transportation with other terminal activities, so as to minimize disruption to regular terminal operations. The total transportation time took approximately four hours, but preparations, of course, required more time.

For the jacking-up operation, Sarens used:

Two operators, two riggers, and a supervisor worked together on the jack-up operation, which amounted to 8-9 hours of operational time, not counting the added preparation time. Jacking up and installing the spacer pieces both took approximately four hours, with one additional hour for set-down.

One challenge that the Sarens team faced was the design of the set-up itself. Limited space meant that the team had to work with minimal clearance between the system and STS cranes. The team also had to work within certain weather constraints, because jacking operations can only be carried out at wind speeds of up to 12 m/second.

"The wind was the limiting factor," says Sarens project engineer Jeremy Vandermeeren. "A weather window of one full day (day light) had to be guaranteed, which caused a slight delay of the jacking operations for the first crane."

However, Vandermeeren says, "The jacking operation was very smooth. The Sartower system allows for a very smooth rising and lowering of the load, with very limited to no horizontal movement."