Sarens Home
»
About
»
News
»
Sarens Transports and Lifts Offshore Jacket Cluster in the UK
Through fog and changing weather, Sarens comes through
10
July 2017 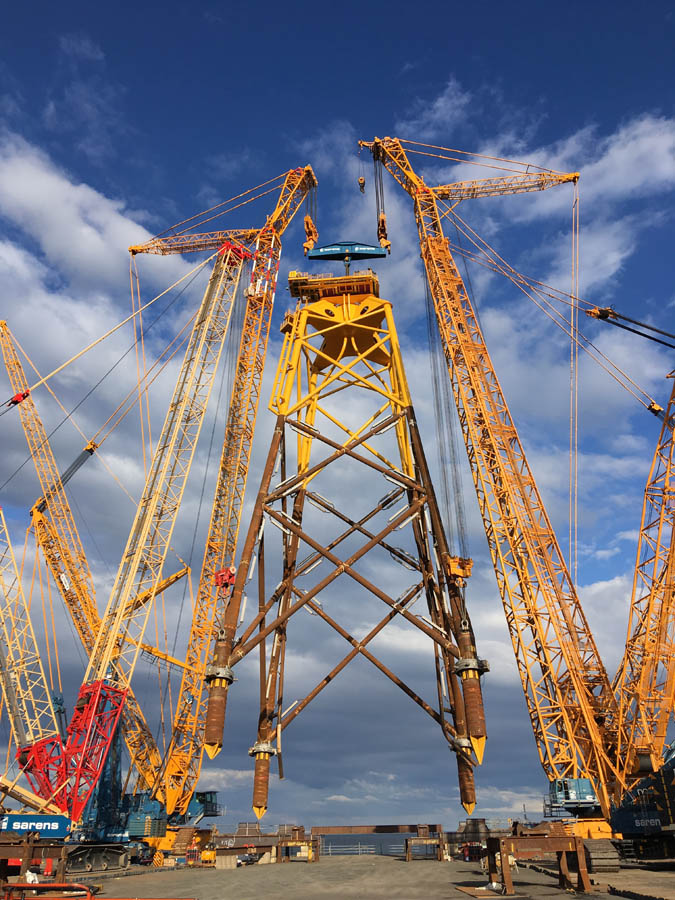 BiFab is manufacturing 26 jacket substructures for the Beatrice Offshore Wind Farm in the North Sea, located off the coast of Scotland. As part of its GBP 100 million contract with EPCI contractor Seaway Heavy Lifting, BiFab will deliver the first ten substructures this August and the remainder in April of 2018.

Working in unpredictable weather and changing visibility, the Sarens team came together to move and lift the first cluster, which weighed over 1.000 tonnes.

The following equipment was used for the operation:

Sarens cranes had been on site since May of 2017. The CC9800 and CC8800-1 were delivered to the site by vessel, offloaded, and rigged on the quayside in their final working positions.

For this operation, the team first transported the 1.022-tonne load 76 metres, an operation that took four SPMT operators about two hours to complete.

With the offshore jacket in the horizontal position at the up-ending location, the Sarens team was ready for the 90-metre lift. They attached the lifting tackle to the lifting points and removed the lashing so that two main lift cranes, the CC9800 and CC8800-1, could begin hoisting the load up in slow increments, slewing slightly.

"The greatest challenge during the lifting operation was to coordinate the functioning of the two main lift cranes and two tail cranes," says Operations Manager Andrew Hunt.

It took four crane operators and six banksmen an hour and a half to up-end the jacket from a horizontal to a vertical position, including twenty minutes for the client to fix brackets to the jacket.

"Coordination and communication played a vital part to ensure the lifting of the offshore jacket was completed safely," says Hunt.

With the lift complete, the unpredictable weather took over for the finale: within fifteen minutes of upending, fog enveloped the top of the offshore jacket and it was no longer visible from the ground.