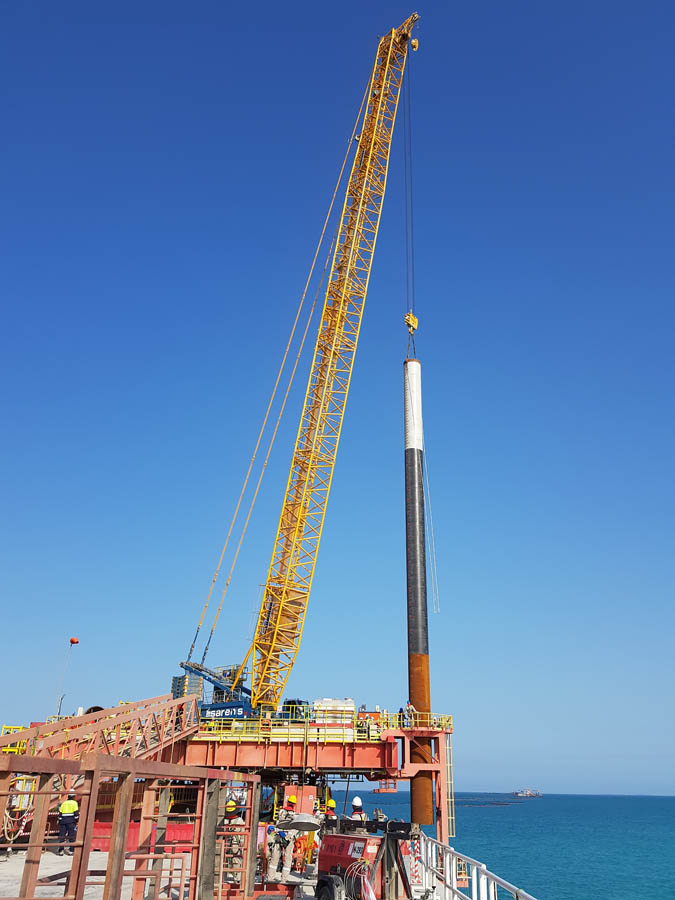 Sarens is in the midst of a 16-month contract at the Al-Zour New Refinery Project in Kuwait, on behalf of joint venture clients Saipem, Hyundai Engineering & Construction and SK Engineering & Construction. Once completed, the Al-Zour refinery will be one of the largest in the world, producing over 600,000 barrels per day of low-sulphur petroleum products to meet both national and global demand.

Sarens is constructing a jetty for the refinery's Offshore Maritime Export Facilities, executing lifts from a canti-travel beam. For this operation, two crewmembers are using the LR 1600-2 crawler crane with 72m SL main boom. They are using a hydraulic piling hammer to pile into the seabed and then installing a concrete deck and placing steel and concrete beams to construct the 1.7km-long jetty.

"We started on land building out over the sea, from a canti-travel beam that moves along the jetty we have just constructed," says project manager John Grover. "At present we are approximately 1km out from the coastline, over the sea. Our team is proficiently operating on the job site and taking full charge of safety."

The LR 1600-2 crane was the only type of crane allowed for this project, and only Sarens could provide such a crane in Kuwait to meet the client's needs. It was sent from Canada via land and sea and took approximately 8 weeks to reach its destination. Once at port, 41 trailers were required to transport it to the Al-Zour job site.

This operation began in April of last year and will continue through August of 2018. Sarens acknowledges the hard work and expertise of the crew making this project possible, and looks forward to successful project completion in the next few months.