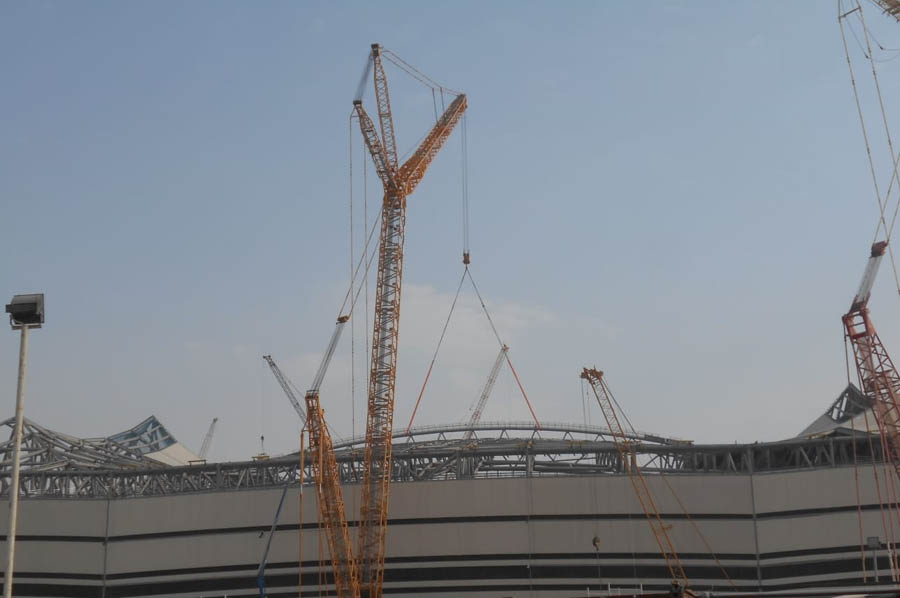 As part of ongoing preparations for the 2022 World Cup in Qatar, Sarens recently completed a tandem lift of the Al Bayt stadium's retractable roof using the CC6800 and LR1750.

Installing a retractable roof is no easy task, especially in unforgiving summer conditions. Working in the middle of extreme summer heat, the crew took approximately two months to assemble the configuration and complete work.

It was a project that demanded precise engineering and execution: the tandem lift had to be meticulously planned to the last detail to account for the pick-up position and travelling distance the cranes had to cover before drop-off. While client CIMOLAI had planned to use three cranes to perform the lift, Sarens advised using two cranes and optimising the load split.

With the plan in place, the project commenced. The LR1750 was already on site, but the CC6800 had to be shipped from Germany, passing through Croatia to collect the remaining portions of its configuration. The main challenge was getting the equipment on-site in time, and the World Cup Supreme Committee helped clear the crane through customs.

For the lift execution, the crew rigged the cranes as follows:

Sarens congratulates the crew for a successful operation and looks forward to seeing the Al Bayt stadium welcome the World Cup in 2022!