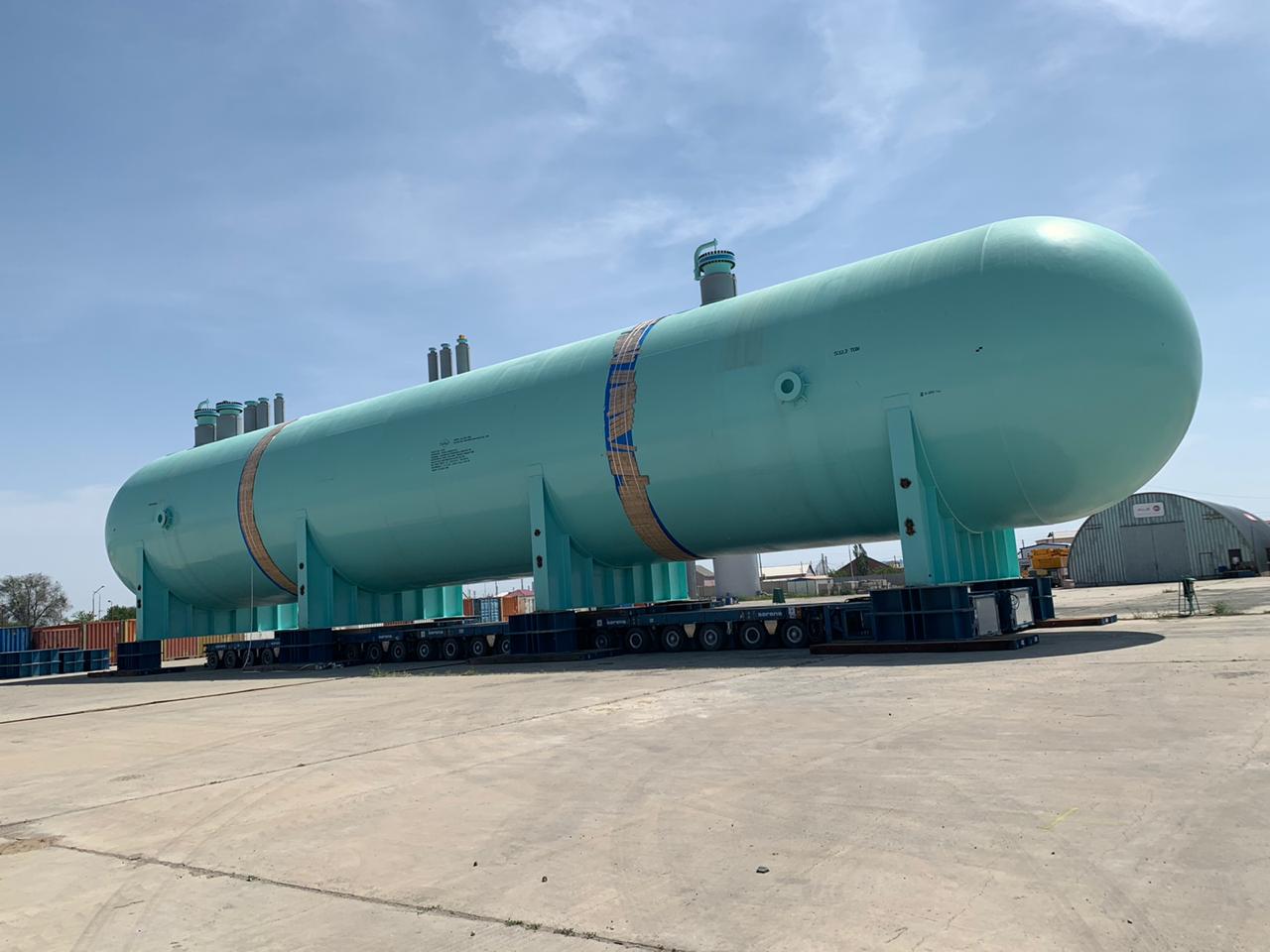 Between April 20th and July 28th, 2020, Sarens was responsible for offloading, transporting, and constructing the gas-chemical complex outside Atyrau. Sarens Kazakhstan executed the full scope of the project, from offloading the barge to storing equipment at the port to transporting and installing it on site.

The complex operation required a year of advance planning, during which Sarens evaluated and secured the best transportation route for four 50-metre long, 10-metre wide, and 12-metre high propane tanks that needed to pass through the city centre en route to the Kazakhstan Petrochemical Industry (KPI) Plant.

Sarens chose equipment that could accommodate almost 600 tonnes at a 20-metre radius, as well as SPMTs that could maneouvre through crowded environments. The equipment included:

All cranes, SPMTs, stools, and transport beams were mobilised from their central base in Atyrau to port, and it took around 20 days to set up all equipment.

Moving massive components through the city centre and beyond

To make it possible, Sarens secured special permission from the city mayor as well as electrical, civil, telecommunications, and other official departments. Around 200 people were involved in the process, including the Sarens team and local government officials.

Crews worked tirelessly to transport 25 pieces of equipment in five convoy sequences over the course of five weeks. To minimise disturbance to city residents, Sarens chose to transport one convoy every Sunday, starting as early as 4:00 in the morning. Each convoy took almost three days to reach the KPI plant, after which the trailer was unloaded and brought back again to the port for the next trip.

A major challenge was transporting all equipment and performing road preparation and improvement work during the ongoing Covid pandemic. Every team member had daily temperature checks and Sarens implemented safety measures to reduce contact. Although the client had planned to come to Kazakhstan during the operation, the pandemic necessitated work by phone and Skype.

In all, Sarens offloaded four propane tanks, three columns, two heat exchangers, eight reactors, and eight reactor accessories at the Atyrau port, which is 10km from the city centre. The CC6800 lifted all this equipment at a 20m radius, slewing and loading it onto the SPMT. For offloading at the port, a total of 15 people were involved.

Once Sarens transported the four propane tanks on site, it needed to install them with the SPMT itself, installing an additional saddle and moving the SPMT in a 90-degree position. This was achieved with rigorous planning, as Sarens had minimal space to park the tanks and install them one by one.

A proud accomplishment for Sarens Kazakhstan

Operations like this highlight the need for the right equipment, industry expertise, and a willingness to work tirelessly with city planners and officials to make challenging projects a reality. Sarens was proud to serve our client, COSCO, in achieving this goal and would like to thank everyone who made this project a success!