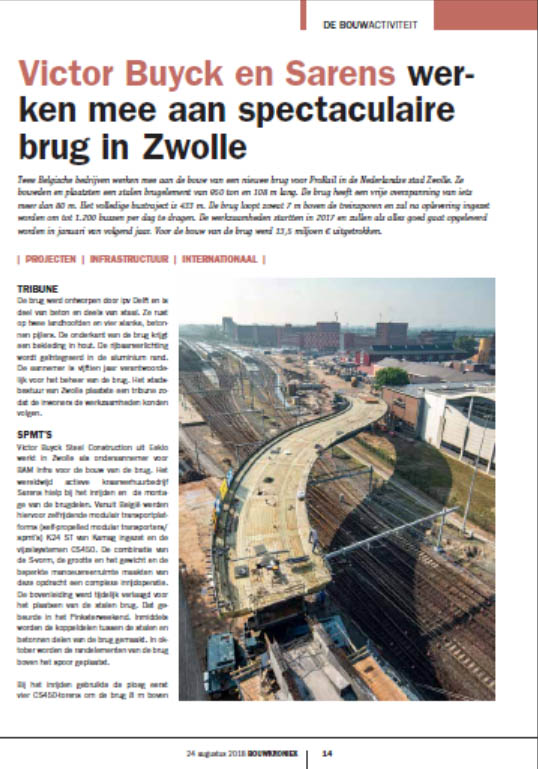 Sarens recently celebrated the success of a jacking and installation operation for the Zwolle Bridge in the Netherlands. The 950T, 108-metre long bridge, which is being built by ProRail, will cross over the train tracks at the Zwolle train station and serve about 1.200 buses per day. Construction on the bridge started in 2017 and is expected to be complete by January 2019.

Sarens performed bridge jacking and installation on behalf of client Victory Buyck Steel Construction. To do it, the team used the following equipment, which was transferred by truck from Belgium:

First, the team used four CS450 towers to jack the bridge about 8 metres above ground level. Then, as part of an installation operation that ran for 28 continuous hours, the team used three sets of SPMTs to position the bridge in place: a central group of four 10-axle lines with a fixed support structure, and a north and south group each with two 10-axle lines and four CS450 on top.

Due to limited working space and the presence of the rail tracks, the crew could not position the central SPMT group below the bridge's centre of gravity, but had to move it further back. In order to stabilize the bridge and bring its centre of gravity further back, the team installed 420T of superlift ballast slabs. They also installed two tension connections between the bridge and central support structure.

The steel bridge's special S-shaped design also required special accommodations. The team installed jacking towers on top of the north and south SPMTs to compensate for its large deformation. They also installed turntables that would allow the SPMTs below the bridge to rotate horizontally, because there was not enough space on site to manoeuvre them otherwise.

With the bridge secured on the SPMTs, the team then performed a test lift and the first 25 metres of transport before transfer work began.

Finally, the team jacked the bridge down onto its foundations using the CS450 jacking system on top of the SPMTs.

The project was a success thanks to the efforts of two project managers, two site supervisors, four SPMT operators, and eight riggers/operators. Working continuous day and night shifts, they successfully completed the operation twelve hours ahead of schedule despite challenges like limited working space and the unique S-shaped bridge design.

"On behalf of BAM Infra I would like to give everyone from Victor Buyck and Sarens a big compliment for the fabrication, jacking, transport and installation of the bridge," said Victor Buyck's client, BAM Infra. "After such a long and intensive process it is extremely satisfying that the bridge has arrived safely and well within planning at her final position."