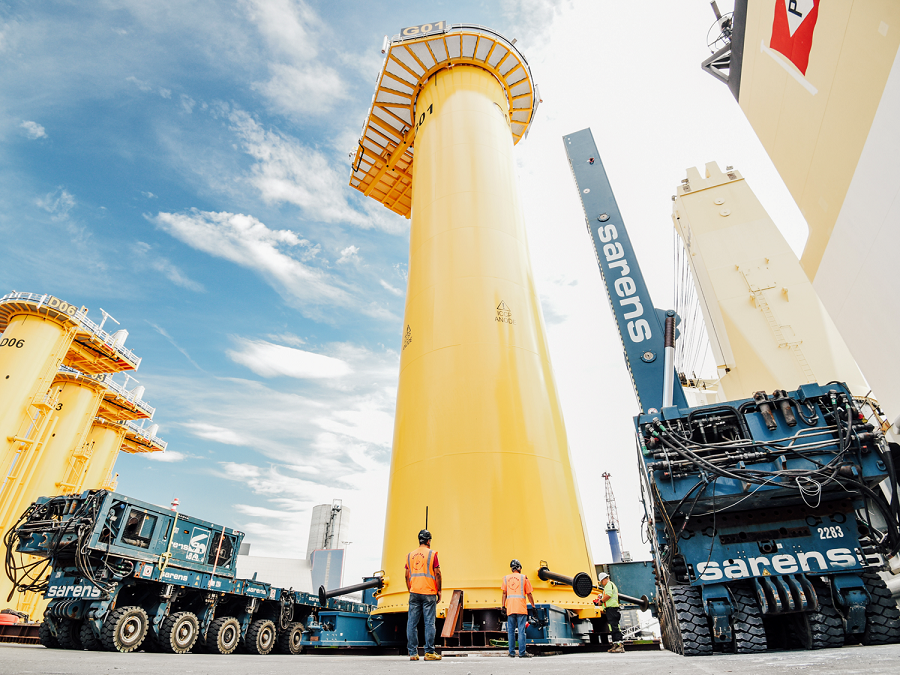 Since January of 2021, Sarens has been involved in the load-in, load-out, transport, and storage of several monopiles and transition pieces for the St. Nazaire Offshore Wind Farm. The work is being performed at the port of La Rochelle in France.

The vessel cranes will be unloading the transition pieces on temporary supports at the quayside before being taken by the Sarens TP Handler. The use of the TP Handler is a new concept with several advantages, including increased safety because all preparation is done at ground level. It was certified with a load test in Wolvertem and sent by road from Belgium to France, with delivery just in time to limit its presence on site. The TP handler was then assembled within one week.

The vessel cranes will also be unloading some monopiles directly onto SPMTs equipped with saddles, while others will be placed in quayside storage areas organised by Sarens. To that end, Sarens and a local subcontractor have constructed 16-18 dunes, ranging in height from 2,1-2,6 metres, for monopile storage. Sarens has also organised the on-site steel support for 48 transition pieces. 20 load-ins were done during 2021 and 20 out of the 29 load-outs are already completed.

Sarens would like to thank everyone who has already put considerable effort and expertise into this project, and wishes everyone all the best in the months ahead.