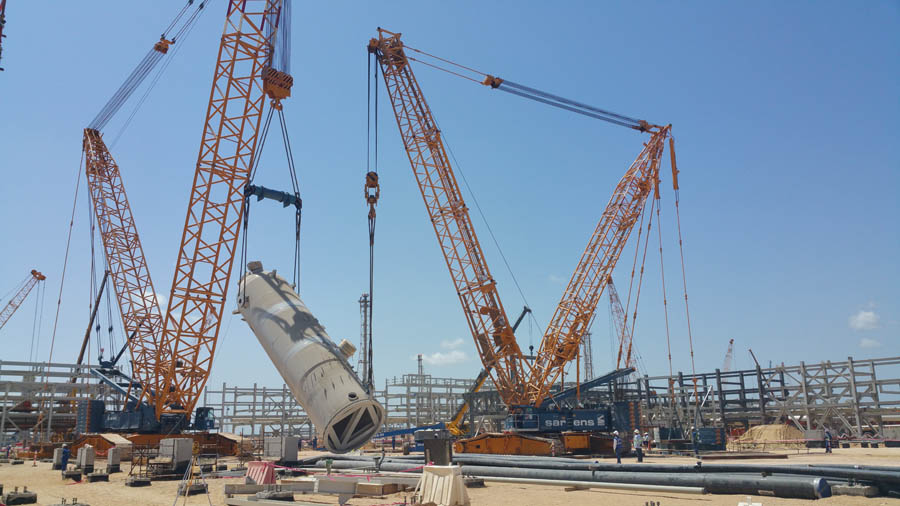 Sarens was contracted by Bechtel Overseas Corporation to perform heavylift operations at BPs West Nile Delta Project over a period of eight months. The initial contract awarded to Sarens was to complete the heavylifting of 10 Cargo. The major task included lifting of four absorbers weighing around 384MT each. This was one of the biggest and crucial heavylift operations ever performed in Egypt. Owing to the team's safe execution of the lifts, Bechtel modified the order to further support it with cranes for general lifting for up to 18 months.

BP's West Nile Delta onshore gas processing terminal at Idku City, north east of Alexandria, is one of the landmark projects of Egypt. Once completed, the plant will provide processing capacity of around one billion cubic feet of gas per day which equals to approximately one quarter of Egypt's current output. BP awarded the contract to Bechtel, one of the leading service providers specializing in oil and gas fields development, to execute a fast-track engineering, procurement, construction and commissioning program for the West Nile Delta Project.

CC4800 in Superlift configuration with 48m Main Boom worked as the main crane supported by LR1350 (tailing crane). CC4800 was transported from Thailand and in order to meet the tight schedule rigging tackles were imported via airfreight from Europe, South Africa and Middle East.

Each of the four absorbers weighing 384MT each, were lifted at a pick-up radius of 18m and a final radius of 16m. The crane did not move during the entire lifting operation, it only boomed-up and slewed to final position. The lifting of the fourth and the final absorber was completed in the first week of July. Prior to the fourth safe and successful lift, Sarens reached 10,000 safe working man hours on the project.

Congratulating the team on the successful execution of the project, Regional Operations Manager, Steven Coulson remarks, "Using a multinational team, Sarens achieved 4 of the biggest heavylifts ever done in Egypt.  Our team worked hard together to achieve the lifts in a safe and professional manner, especially taking into account the limited working hours available during the Ramadan period."