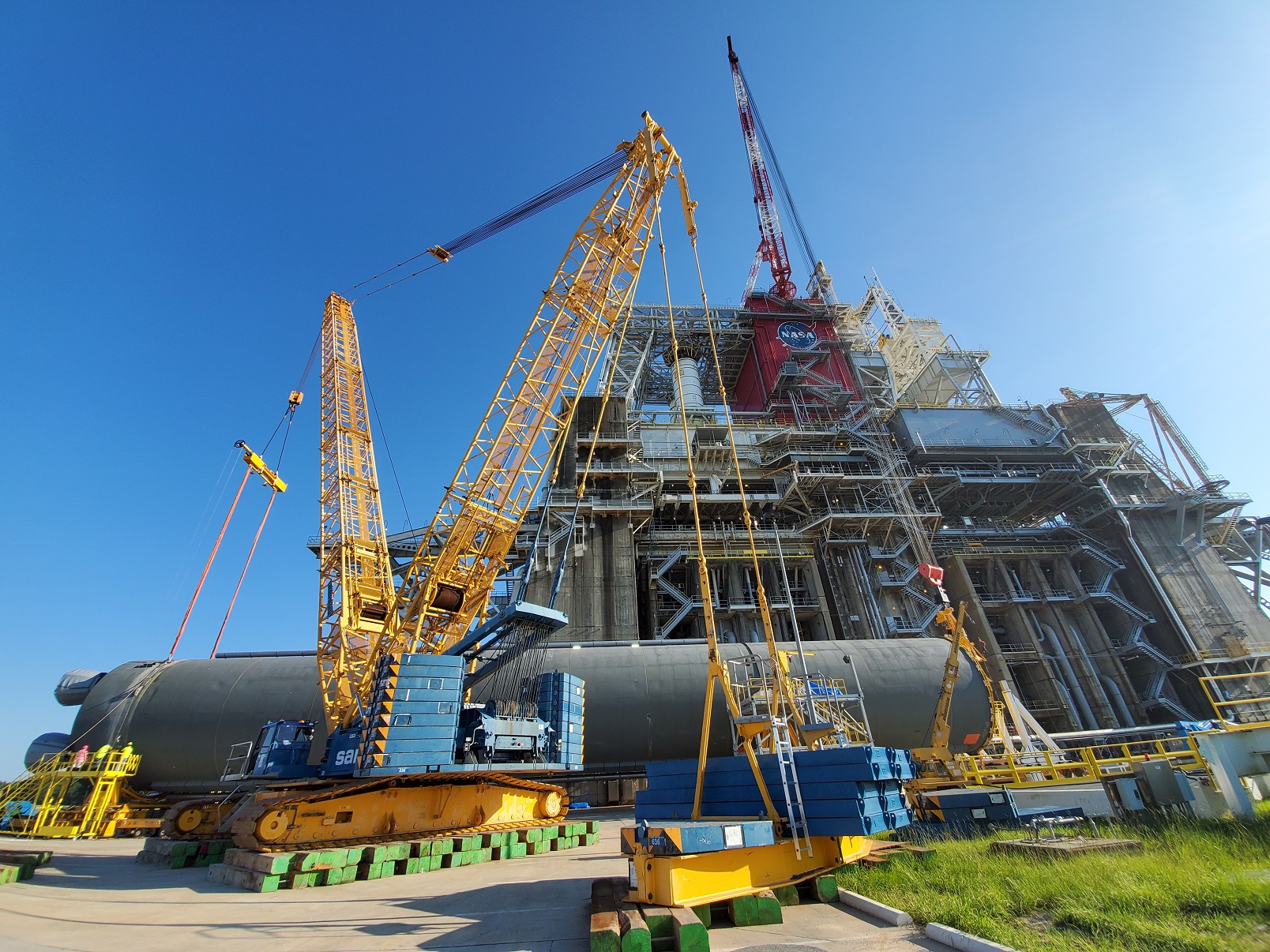 Sarens recently had the pleasure of working with NASA on its critical Mission to Mars project, a number one priority for the United States government. As part of this project, Sarens assisted with B-2 Test Stand lifting activities at the Stennis Space Center (SSC) in Mississippi.

The SSC is a NASA rocket engine test facility where all space shuttle rockets, like those for the Mars mission, are tested. Because of the nature of the mission-critical lifts to be performed at the space center, Sarens had to ensure that all equipment and rigging met NASA’s exacting technical standards, as outlined in NASA-STD-8719.9. This was crucial, as every lift Sarens performed had a direct impact on US national interests, and would carry tremendous cost and schedule ramifications in the event of failure. For this project, precision and perfection were absolutely vital.

With careful attention to every detail, Sarens planned to use an LR-1350 in super lift configuration for the B-2 Test Stand lifts. Sarens chose this particular crane because of the height and radius which the load needed to travel, and because the LR-1350 could be assembled and disassembled with expediency, leading to lower mobilization costs.

Transporting the LR-1350 to the NASA test site required 14 truckloads, only one of which was oversized. Transport was split over three days due to the strict security measures in place at the test site, and assembly and equipment testing took a further four days to satisfy NASA’s strict acceptance policies.

With the crane in position, the first thing Sarens did was to tail a mock-up of the SLS (Space Launch System) to ensure all procedures and connections worked flawlessly. During the tailing operation, the LR-1350 started by lifting 75 tonnes at a 31-metre radius, slewing while reducing both the main boom and derrick radius to maintain the SL tray floating, and ending at a 33-metre radius.

Throughout the lift, several spotters both from NASA and Sarens were required to communicate the centerline path that had to be followed to prevent twisting of the main crane’s lifting attachment (the hook block swivel had to remain locked), and SL tray floating height as the radius was adjusted. Complying with NASA’s guidelines, Sarens also had two crane operators and one helper on site to mitigate fatigue or unforeseen illnesses.

“The entire NASA Team is very pleased with the support provided by Sarens to install and remove the Pathfinder Vehicle from the B-2 Test Stand at Stennis Space Center,” said Todd Mannion, who is the project’s Senior Lead Engineer for all technical aspects. “The lift planning, lifting equipment, and personnel provided by Sarens to execute this significant lift demonstrated the knowledge, professionalism, and experience that leads to success. Thanks for the excellent work.”

Sarens would like to commend everyone who was part of this important operation, and to thank NASA for entrusting us with this incredible opportunity.