Sarens Home
»
About
»
News
»
Young Engineers Competed to Baptize Sarens Floating Foundation Installer
Inspired by the phenomenal installation of footings of the New Champlain Bridge, the young students of Ãcole de Technologie SupÃ©rieure named the Sarens FFI as Poseidon, the God of the Sea.
10
September 2016 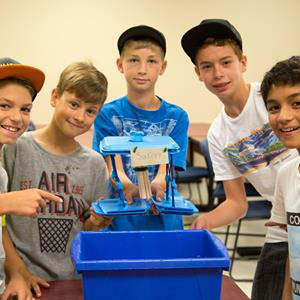 Sarens recently performed the breathtaking installation of footings for the New Champlain Bridge in Canada by its uniquely customized equipment- the Floating Foundation Installer (FFI). Construction of the New Champlain Bridge is one of North America's biggest worksites and the use of FFI has made this project a great hit among the people of Canada. This floating installer was specially designed by Sarens for the Champlain Bridge project and carries immense pieces, weighing over 1000 tons (including the footing and initial pier section) across the water to its final destination and places them in a very specific location at the bottom of the river Saint-Lawrence.

Inspired by the project, Signature on the St. Lawrence organized a competition for young students of  École de Technologie Supérieure (ÉTS ) during the One day camp Future Geniuses of the ÉTS. The camp organzies science-based activities for children aged between 6 to 12 years. The activities provide them with opportunities to learn, to discover and develop interest in science through a program that combines sports, discoveries, science and technology. The purpose of the event was to interest young students in a major engineering project near their place and give them an opportunity to realize the scale of the project, the complexity of tasks and most importantly, feed the curiosity of the future engineers.

The week long competition took place in August during which the students were mad to meet Sarens project manager, Stéphane Héroux who talked about the Floating Foundation Installer and the Champlain Bridge Project execution. Following the session, the students were given a double challenge: build and reproduce the machine model so it floats and give it a name worthy of its extraordinary mission. The winners were selected by a jury comprising of representatives from Sarens, ÉTS and Signature on the Saint Lawrence. They were awarded by Marc Miller , MP for Ville- Marie - South West - Île -des-Sœurs in an exclusive ceremony.

Mikael  Côté- Legagneur, the 7 year old, was declared as the winner for baptizing the floating foundations installer as "Poseidon" meaning the God of the Sea, expressing the power of the machine. The winner team that made the best model of the machine included Frédéric Sauvé(11 years), Matteo Carmosino(9 years), Mathis Arseneault(11 years), Romain Fagouet(12 years) and Axl Emiliano Castillo Blasco(12 years). Each child received construction equipment and got to see Poseidon from afar. Soon, the new name will appear on the machine itself for all to see.

''Our future geniuses were very excited by the contest organized by the engineers of the New Champlain Bridge Project and Sarens, '' said Alexandre Richard , coordinator of Les Futurs Génies day camp at ÉTS in Montréal. ''It was a unique opportunity for them to learn about an exciting project for Montréal and one of the largest infrastructure projects in North America, while enjoying the impressive Sarens equipment allowing for its construction. Congratulations to all our winners! ''